As parents, caregivers, and guardians, we all want what is best for our child. Prior to becoming a mother I used to purchase popular brands of everything. Food, clothing, hygiene products, you name it. However, after becoming a SAHM and relying solely on my husbands income, I realized I was being a bit extra. I’m not saying we are having financial issues, or that you may be as well but it doesn’t hurt to save a few dollars.

When grocery shopping for your Little’s ones, the brand is the first thing you look for. Gerber, Beech-Nut, Plum Organics, Happy Family, and Earth’s Best, are just a few of the popular brands on the shelves. Have you ever asked yourself why you look for a national brand and not a store brand? I have. I assumed the ingredients and quality is better because it costs more. However, after taking the time to read all of the ingredients and nutritional values, I realized I was mistaken. There aren’t that many differences in taste, quality, ingredients, and nutritional values. For example, lets compare Gerber’s Graduates Banana Cookies, to Parent’s Choice Banana Cookies. 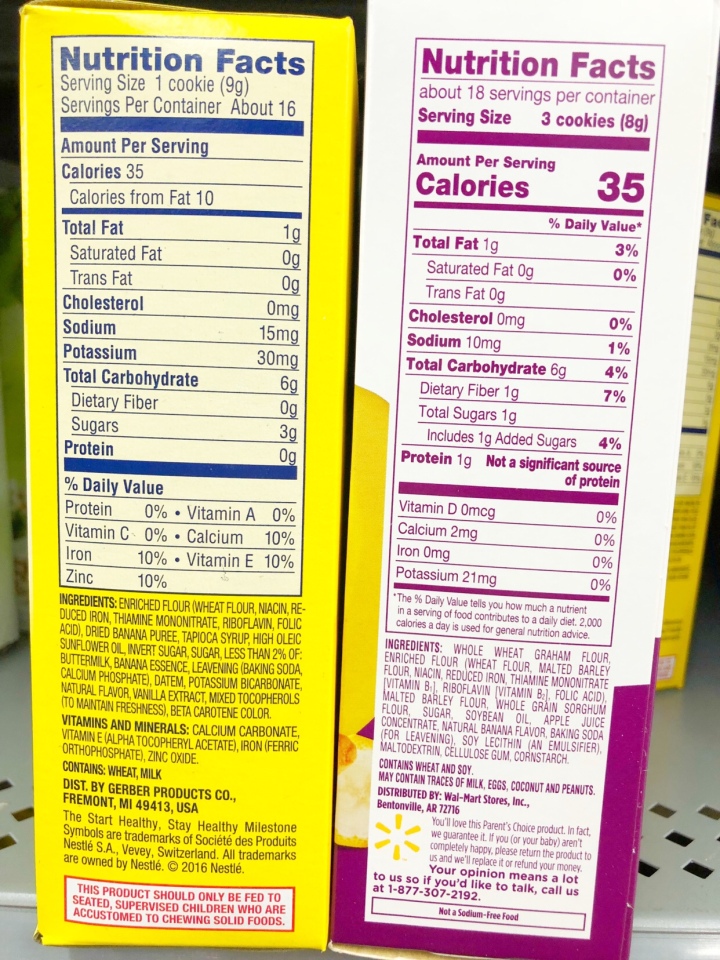 The nutritional values are almost identical. Almost ever value is on par with the exception of sodium because Parents Choice has 5mg less, 1g of fiber whereas Gerber has none, less sugar, and more protein. However, Gerber has 10% of the daily value for iron, zinc, vitamin E, and calcium. If you look at the ingredients you will see that there are slight differences between each brand. Gerber seems to have more natural ingredients compared to PC. The difference isn’t too much.

Pear Juice is her favorite so I wanted to calculate the differences as well.

The differences in the ingredients and nutritional values aren’t that different with the exception of sodium, sugars, and carbs, in which Parents Choice has more.

We now know the nutritional values and ingredients about both but what about the taste? I decided to do an experiment and see if Anaís will notice the difference.

For two weeks I gave Anaís Gerber’s Banana Cookies and Gerber Pear Juice. The cookies were her only snack and she had it everyday. She had 4oz of juice with each snack and meal. The following two weeks I gave her Parent’s Choice Banana Cookies and Parent’s Choice Pear Juice. Once again, it was her only snack and she had 4oz of juice with every snack and meal. Based on my observations, Anaís enjoyed Gerber’s brand of cookies the best and preferred Parents Choice pear juice. She finished her juice each time, whereas with Gerber, she always left some in the cup and didn’t reach for more. Also, she was more inclined to reach for more of Gerber’s Banana Cookies. I assume she preferred the store brand of juice because it has a sweeter taste and she likes Gerber’s Banana Cookies best because they taste like actual bananas and are shaped like them too!

Banana cookies and pear juice aren’t the only snack Anaís enjoys. She very much enjoys the baby version of chips. Gerber calls them Lil’ Crunchies and Parent’s Choice calls them Little Munchers. At first we purchased only Gerber’s brand because we assumed they were healthier. The Gerber can had “made with whole grains” and “non GMO” printed in big, bold letters. It is natural instinct to reach for a product with those nutritional qualities. One day while grocery shopping, I went to go pick up a can of Gerber’s Lil’ Crunchies for her and realized Gerber was out of her favorite flavor, veggie dip. I opted for Parent’s Choice Veggie instead. Anais devoured them! She usually enjoys them but she seemed to enjoy them a little more this time around. I tried a few myself (I’ll admit, I taste all of what I feed her before she eats it). They were filled with so much flavor! The vegetable flavor was very apparent and it had a faint taste similar to whole wheat bread or pasta.

I compared the two brands to see what the difference was in ingredients and nutritional values. I wasn’t surprised when there wasn’t much of a difference. However, why does the store brand taste better? Honestly, I’m not sure. Maybe it’s the added “spice extract” that Parents Choice added. The nutritional values were what I expected. Parents Choice has less fat and calories but more sodium and more potassium. My take on this is that store brands try a little harder because of the competition and they put a little more effort into their recipes. 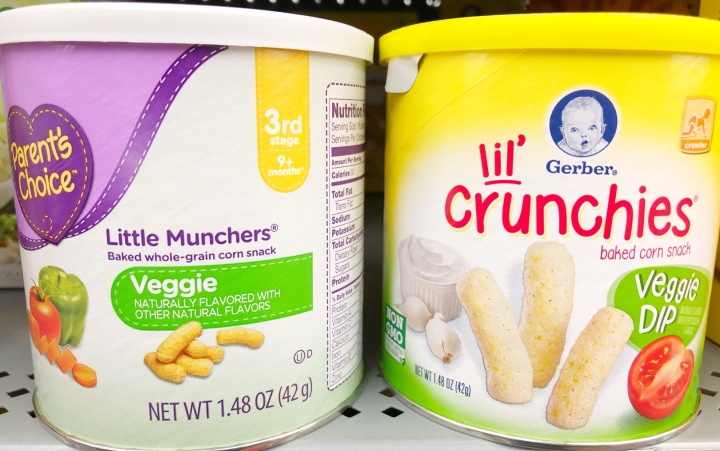 Last but not least, let’s talk Puffs. I haven’t met one baby that hasn’t enjoyed these little pieces of deliciousness. They come in all sorts of yummy flavor combinations: apple and cinnamon, blueberry, banana, strawberry and apple, the list goes on. It’s been a staple in Anaís diet since she began solid foods. It’s a great finger food for beginners. Since she prefers Parents Choice brand juice and Little Munchers, I decided to purchase their brand of puffs as well. 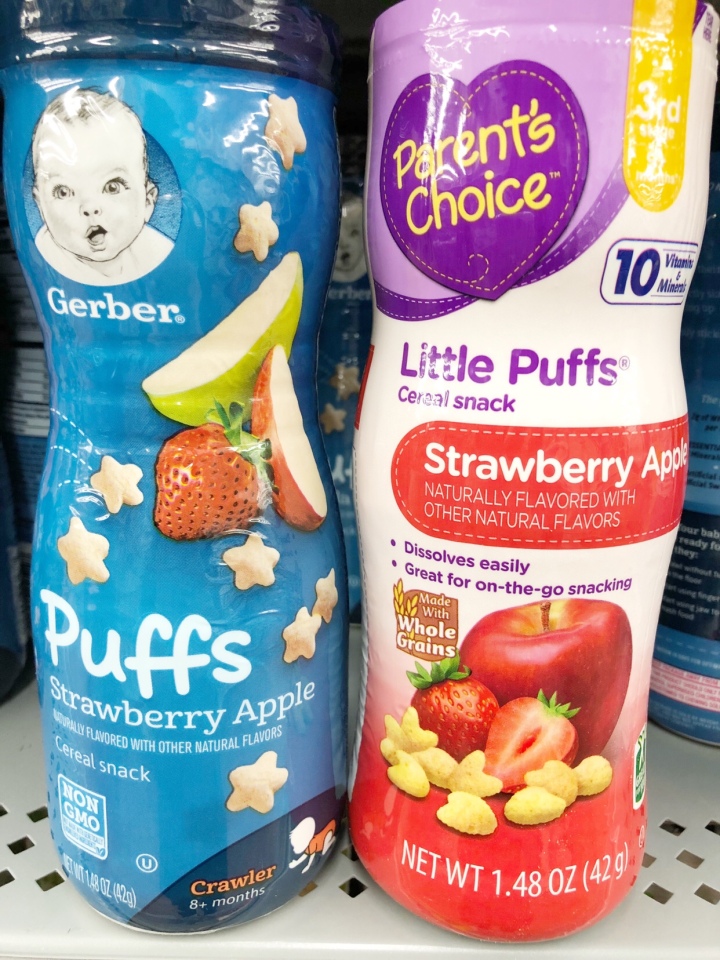 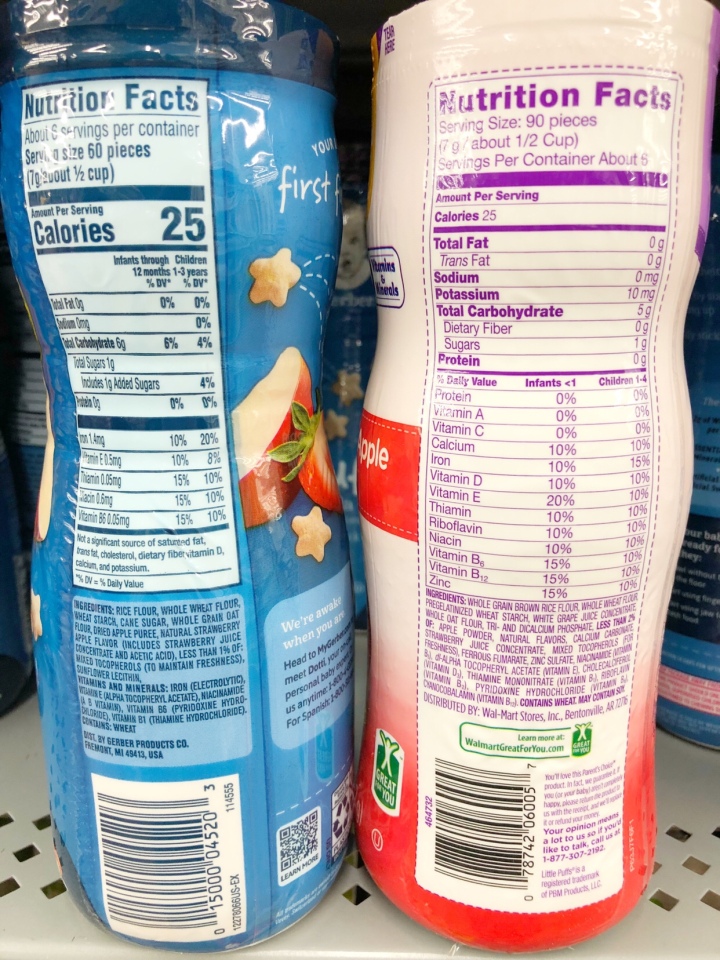 Parents Choice Puffs has better nutritional values compared to Gerber’s. The ingredients are quite different. PC has a longer list, where Gerber’s list is short and sweet and seems a lot healthier. As I mentioned above, Anaís has been consuming Gerber’s brand of Puffs since she began solids. Without warning I started purchasing only the store brand. She didn’t notice, she didn’t make a face or push it away, she happily consumed them as if nothing changed. I too, tried the PC brand and it tastes just about the same to Gerber’s.

In this post I compared Gerber vs. Parent’s Choice (Walmart store brand). Walmart is our go-to place for groceries and their brand fits in our lifestyle. We purchase their milk, bread, and yogurt. It wasn’t hard to do the same with the tiny person we feed. Gerber succeeded in some and so did Parents Choice. Overall, there is not much of a difference between the two other than the price. Some individuals look down upon store brands of anything but why? There is nothing wrong with saving a few dollars here and there. Also, I know a few of you prefer to skip store bought altogether and make your babies food instead. That’s great too! We all do what suits our needs. There’s no need to look down or judge a parent on what brands of food they buy for their child. As long as their bellies are full and they are healthy, who are we to judge 🙂

A mama booking a vacation!